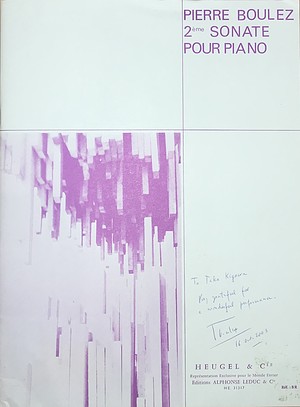 "Very grateful for a wonderful performance." - The score of Pierre Boulez's Second Sonata for Piano, autographed by the composer for Taka Kigawa.

"I was very much impressed by the brilliant way he performed them (solo piano works of Pierre Boulez.) He was precise, and at the same time inventive." - Pierre Boulez

"Mr. Kigawa is always a poised guide through the most daunting music, as in his preternaturally unruffled evening-length survey of Pierre Boulez’s complete solo piano works. - Zachary Woolfe, The New York Times

"His warm, intimate accounts of this repertory brought the music down to earth... He played the first movement of the epochal Sonata No. 2 with less violence than circumspection, gentility and wit." - Zachary Woolfe, The New York Times

"In the Second Sonata (1947-48), which made its composer’s international reputation, Mr. Kigawa played with a surprisingly mellow tone, relishing the resonances. The big chords in the slow second movement were moist, not dry, and, later in the work, even crashing clusters of notes were juxtaposed with small moments of startling delicacy. The sonata’s ending remains one of the most gorgeous things Mr. Boulez has written, a quiet section of still, solemn beauty gradually spreading out into space." - Zachary Woolfe, The New York Times

"The performance culminated in the tour-de-force Second Piano Sonata, in which Boulez systematically dismantles the framework of classical music, taking apart in successive movements sonata form, the slow movement, a scherzo, and the fugue. Though the work is an exercise in entropy, as tightly knit themes start unraveling into irregular rhythms and intervals, Kigawa disassembled it meticulously, bringing sharp focus to Boulez’s complex web of ideas. Played by memory, Kigawa showed off his athleticism, remarkable restraint, and delicacy in this lucid and lustrous interpretation." - Amand Angel, New York Classical Review

"This adventurous pianist plays Boulez’s Piano Sonata No. 2, an immense act of destruction and creativity composed immediately after the Second World War. When Mr. Kigawa played the same work in 2014, as part of a concert of Boulez’s complete piano music, my colleague Zachary Woolfe heard a remarkable delicacy in a work that can sound dry and harsh." - David Allen, The New York Times

"This dynamic pianist has been especially acclaimed for his interpretations of daunting contemporary music. He has long made the solo piano works of Pierre Boulez a specialty in performances that bring out the exhilarating energy and myriad colorings in these fiercely difficult scores. In anticipation of Mr. Boulez’s 90th birthday in March, Mr. Kigawa has been on tour playing the complete Boulez pieces for solo piano in a single recital." - Anthony Tommasini, The New York Times

"The heart of Kigawa’s recital, and the heart of Boulez’ piano repertoire, was the Second Sonata. Written between 1947 and 1948, it was the first piece that Boulez published, and his calling card during those years, besides it being a true masterpiece of the European post-war schools. According to the composer, it implied “the conscious and total rupture with the classic dodecaphonism, a decisive step towards the world of complete Serialism.” This large scale ambition asked for a large scale realization. Although discontinuity is pushed even further here than in the First Sonata, Boulez falls back in the four movements to a series of cells that create an illusion of stylistic unity to sustain this colossal and extensive construction. The “Lento” is perhaps one of the best works that Boulez has ever written, and seldom has it sounded more focused than in Kigawa’s version." - Pablo Gianera, La Nación

"Its (Boulez's solo piano pieces) interpretation requires, as Boulez said in a conversation with Andras Varga, “steel hands in velvet gloves,” and that’s exactly like the formidable Taka Kigawa performed it: with extreme precision and smoothness." - Federic Monjeau, Clarín

"I’ll admit it right up front: I’m not the biggest fan of Pierre Boulez’s compositions. While they are certainly some of the most important works of the 20th century, I find they can lack a certain liveliness, passion, soul, and wit: those human qualities that we seek when listening to abstract music. Much of this is deliberate, part of the postwar aesthetic that Boulez and his contemporaries exalted. Boulez famously wrote “Schoenberg is Dead” as a way to separate himself from what he perceived as the overly emotive and Romantic qualities of prewar12-tone works. Which is all the more reason to congratulate, or rather, scream my unadulterated thanks to Taka Kigawa, the piano virtuoso who breathed life into this heavy, cold modernist Monday night at (Le) Poisson Rouge. Kigawa played one of the most imposing works of the immediate postwar era, Boulez’s staggeringly difficult Second Sonata for Piano, which, despite my previous misgivings on the composer, is a nuanced and multi-faceted piece. It would have been a crime to play Boulez with the late-Romantic fervor of Liszt or the impressionistic air of Debussy just to inject some emotion. Instead, Kigawa approached Boulez on his own terms, taking the music to new realms of expression and poignancy without ever betraying the composer’s brilliant, yet academic, creation. Playing from memory, Kigawa knew his way around every turn, every sustained overtone, and ghost note, delivering a deliberate effortlessness in the opening movement. Boulez’s music is brainy and can be difficult to approach as a listener, but the second movement had a mysterious delicacy and, dare I say, a tenderness to it under Kigawa’s fingers. The fourth and final movement was the finest, eschewing the relatively even dynamic of the previous movements and rushing forth in an exciting and animated penultimate section, before slinking away with an almost defeated denouement. What was perhaps most striking about Kigawa was his impeccable technique with this incredibly taxing program of music that tests the very limits of what a piano can do." - Jake Cohen, Consequence of Sound

"Mr. Kigawa ended his recital with one of the most talked about works of the serial music school, Boulez's Second Sonata. If Paul Griffiths was right when he characterized Mr. Kigawa's playing as “poetry, intense, and spontaneous,” then perhaps it would be fair to call his playing of the Boulez the making of poetry out of a maze of seemingly disconnected passageways. To say the least, Boulez is not the no-holds-barred favorite among today's critics. But one is convinced that Taka Kigawa knows exactly what this piece is about, and he wastes no time in demonstrating that by dispensing with the score and getting right into it. One unfamiliar with the score will see immediately that many more auditions will be required before getting a listening handle on it. But it serves no purpose to argue that Boulez is 'emotionless junk;' and we recommend to those observers that they listen to Kigawa play it, again and again. Maybe by the time he reaches the final reference to the B-A-C-H motive, they will see that Boulez has brought the inspiration of the past to the analysis of the present." - Barry L. Cohen, New Music Connoisseur

"The powerhouse pianist Taka Kigawa, who was on hand to play all of Pierre Boulez’s piano music—three Sonatas, the Notations and a few smaller works, 90-minutes of densely abstract music, all told—in one sitting, with no intermission, and from memory." - Allan Kozinn, The Wall Street Journal

"There were striking moments throughout." - Vivien Schweitzer, The New York Times