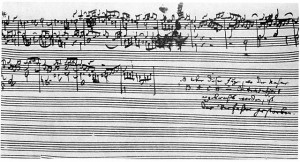 "Sensitive and deeply considered, with its individual lines painted in subtle gradations of color and weight... A dark hue and a deeply melancholy spirit that seemed to prefigure the fugue’s sudden ending, where Bach left it incomplete." - Allan Kozinn, The New York Times

"There are certain performances that impress with the sheer courage needed to attempt them. Playing all of Bach’s 'Art of Fugue' from memory and without a break is a tightrope act of musical daredevilry." - Vivien Schweitzer, The New York Times

"There's something to be said for attending a concert with just your ears. That was the case at a crowded Le Poisson Rouge on Monday night. The event: pianist Taka Kigawa was the featured artist playing all of Johann Sebastian Bach's The Art of the Fugue. In a crowded club, it wasn't always possible to watch the artist play, which led to one's ability to concentrate on and enjoy this final Bach masterpiece. Before the review, some explanation:The Art of the Fugue is one of Bach's last creations. Starting with a simple theme. The composer embarks on a thorough exploration of counterpoint and thematic development. In the course of the fourteen movements, this theme is subject to the following techniques:

augmented: note values lengthened.
diminished: note values shortened.
inverted: (a low melody trades places with a high one)
imitated: (a theme is repeated on lower or higher voices)
stretto: ("narrowed") where themes are repeated in an overlapping structure.

Bach's work contains double, triple and quadruple fugues, where the artist is responsible for maintaining many contrasting voices all overlapping. There are also so-called mirror fugues (where the whole piece is played, inverted and then repeated) and the four canons that divide the 14 movements and provide a stylistic calm at the center of a storm of counterpoint.
Mr. Kigawa started simply, playing the opening theme with eloqence before starting to add embellishments and complexities as dictated by the score. As the soloist moved through the early Contrapunctus sections to the first canon, one heard fresh ideas emerging from the thematic development, ideas that acquired a life of their own in the next set of movements. Throughout, the pianist maintained a fluid, singing tone and a steady, determined tempo which allowed the musical ideas to present themselves naturally.
Contrapunctus V through VIII are more complex, with opportunities for glissando runs down the keyboard and the introduction of themes that would not sound out of place in the complicated orchestrations of Richard Strauss. Indeed, listening to Mr. Kigawa play this work, one was conscious of Bach's true place in Western music, and how his ideas and experiments sparked the imaginations of countless composers that followed.
The Art of the Fugue has two climaxes. The first is Contrapunctus XI, which takes all of the complicated ideas from the eighth movement and inverts them in a challenging way for the player and the listener. The second is the grand triple fugue of Contrapunctus XIV. This last movement ( restates the opening theme and builds afugue on it. Then, it stops, and a new theme is played and thematically developed. Finally, a third theme build from the note row B?-A-C-B natural ("B-A-C-H") is presented, with Bach's own name develiped into a sort of fugal signature. The three grand themes are restated....
and then the piece ends abruptly, unfinished. When Mr. Kigawa stopped playing, the silence spoke volumes." - Paul J. Pelkonen, Superconductor

"His famed take on Bach’s 'The Art of the Fugue' is ebullient and audacious." - Stacey Anderson, The Village Voiece

"He continues to amaze us with his undistracted service to the most uncompromising piano music being written today. But that's not all there is to his artistry. When we hear him perform the J.S. Bach's the Art of Fugue, we realize how beholden he is to the great forebear of all the music that has come down the pike since his time, even a lot of jazz. Every note is clean and distinct, yet what we hear between the notes projects the great beauty that can be expressly felt on the piano of today, an instrument unknown to the Baroque master." - Barry L. Cohen, New Music Connoisseur