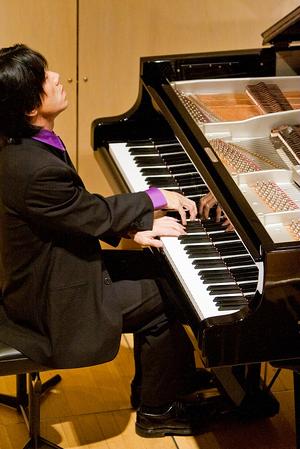 "When Melissa Smey, executive director of the Arts Initiative and Miller Theatre at Columbia University greeted the audience for a late afternoon concert of the music of Gyorgi Ligeti – presented by Taka Kigawa, piano and Jennifer Choi, violin, both members of the modern chamber ensemble Either/Or and independent French horn player Rachel Drehmann – she said, “If you haven’t been to one of our Pop Up Concerts before … What took you so long?” It’s a good question. The Miller Theatre Pop Up concerts are always a treat: no matter who the artists are – and they’re a highly varied group, month after month, and year after year – and no matter where the musical repertoire lies on the spectrum from traditional to way-out-there, from conservative to funky, the series’ core double-commitment to integrity of artistic presentation on the one hand and audience intelligence on the other is consistently rewarding.

For the Kigawa-Choi-Drehmann Pop Up concert (somewhat misleadingly billed as an Either/Or performance), the music was all by Gyorgi Ligeti (1923-2006).

The first half of the program consisted of Kigawa’s performance of six of Ligeti’s Piano Etudes (Book 3 Number 15, Book 2, Number 8, Book 1 Number 4, and then, all from Book 2, Numbers 11, 9 and 13). Kigawa performed them essentially without break, thereby creating one something like one single extended etude, one long rhapsodic essay.

Kigawa exacts of the piano its every possibility. His playing matches sensuality with percussive dynamism, shimmer with hammer, and glow with pizzicato precision. As Ligeti’s writing, in these etudes composed between 1985 and 2001, encompasses moods and explorations that range from pastoral meditation to dense immersion in speed itself, Kigawa shapes the sound of the piano to meet the composer’s intentions: the music is rhythmically demanding, even as the texture constantly moves from smooth gentleness to abrasive roughness and back.

Each individual etude is its own brief examination of a subject; the etudes are often speculations, unconcluded examinations of particular questions. As Kigawa assembled these six etudes, several subjects emerged. Microcosm and macrocosm are each other’s reflections; contemplation’s object is simultaneously everything and nothing; intense examination of any particular theme leads to both outward explosion and toughly focused introversion.

The second half of the Pop Up concert consisted of Ligety’s 1982 Trio for horn, violin and piano, often called the “Homage to Brahms.” Kigawa and Choi are Either/Or colleagues and work together on a regular basis; Drehmann is an independent musician. The three together played together as a coherent, fluently collaborative trio, subtly attuned to each other’s pacing and breathing; their mutual alertness to the spaces between sounds and silence on each other’s instruments was crucial to the success of this performance, as Ligeti’s score makes complex demands on all three instruments, especially the horn.

Ligeti’s Trio makes explicit reference to the historical musical past: it expresses gratitude to the insights of Romanticism, even as it negotiates modern stresses by means of vocabularies as diverse as jazzy cynicism and near symphonic anguish. At various moments during the trio, two instruments engage in dialogue while the third maintains a muted, constant presence; at other times, all three are engaged in musical interconnections involving several rhythmic and melodic subjects at once.

In the hands of less virtuosic musicians, Ligeti’s material can spin out of control. Kigawa, Choi and Drehmann, however, from the very opening, invited the audience into an experience of listening based on complete trust. The work’s elegant, almost wistful conclusion – a distillation of harmonic lines into quiet, unresolved ambiguities – was compelling.

This Trio, a familiar piece of the complex Ligeti repertoire, was beautifully presented by Kigawa, Choi and Drehmann, and the Pop Up concert audience was appropriately pleased.

For audiences who want more of Ligeti’s piano etudes, Kigawa will provide another opportunity: on May 16, at the Poisson Rouge here in New York City, he will perform all eighteen.

All in all, this was a wonderful presentation of demanding music by marvelous musicians.