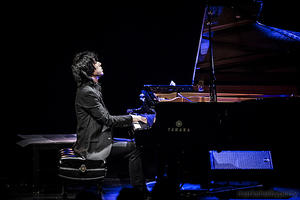 The phenomenon of Taka Kigawa supersedes his rare programing or his proficient technique or radiant musicality. Rather, no matter what his selections–whether an evening of John Cage or The Art of the Fugue or last night’s organic musical evolution–Mr. Kigawa is the most vital re-animator, giving life to every note of music which his fingers touch.

Other pianists who highlight a concert with, say, the 30-minute piece by Tristan Murail or a work for piano and electronics by young Italian composer Marco Stroppa might have an audience intimidated, ready to “take a chance”. Or, one thinks of Marc-André Hamelin, also a programing daredevil, for whom audiences attend to hear a bravura artist at work.

This is not Mr. Kigawa’s mode of operations, and the rapt full-house audience at Poisson Rouge last night understood this immediately. He approaches the piano almost gingerly, and when the sounds are unfamiliar (even the Debussy complete books of Images are rarities), one begins to hear them for themselves. Not as oddities but as treasures which must be heard.

Whatever the emotional reaction, Mr. Kigawa programmed this trio of works as an organic evolution of 20th Century sounds. Sounds which rejected 19th Century, literalness for the kinship with the extra-musical.

Even the opening Debussy Images belied the title. With his love for the archaic, Debussy probably was referred to the original meaning of “image”–a picture in the mind, rather than a painting. The titles were also misleading to a careful listener (“Them thar goldfish don’t sound like no goldfish I ever seen.”). They were not pictures at an exhibition, they were nuances, breaths, suggestions.

Mr. Kigawa played them with that sense of distant respect. Reflections in the water was delicate but distant from any relations to the fluid. Little rubato, but a simple announcement. The Rameau homage was less a modal time trip than an exercise in timbre and rhythms. The Movement was almost breathtaking. Debussy specifies “with fantastic lightness but precise”. True, I have heard this movement played as a single unitary texture, but Mr. Kigawa rarely put his feet on the peddle, offering both particles and waves.

In Book Two, the chime effects of the bells was under the more abstract intimacy of the piano sounds; the descending moon only hinted at nocturnal pictures. As for aforesaid goldfish, Debussy somewhere said that the pianist should become not the fish but the movements of the fish. And this was what we heard.

The philosophical element of the concert continued with the half-hour Tristan Murail Dominions of oblivion. If Debussy was creating music from an imaginary picture. Mr. Murail (a familiar name to New York concertgoers) was conceptualizing a music without any reference to pictures inner or exterior.

Not even reference to a piano!!!. By commanding the artist never take his foot off the sustaining pedal, he was saying that no single note could be a single note. That we had to listen to its overtones and undertones and notes before and beyond. The usual “attacks” on the keys were “scars on the continuum.”

What did Mr. Kigawa produce in these 30 minutes? We heard repetitions both consonant and dissonant. Heartbeats of rhythms, along with thunder in the bass. Quintuple-fingering on a single note (Mr. Kigawa handled it as if playing Paganini on a Strad), we heard chaos and stability, one leading to the other, a seeming anarchy counterpointing to romantic Debussy-like filaments.

And while Mr. Murail’s noted musical ideology and techniques obviously were carefully constructed, the effect, even more than the Debussy, took us away from Poisson Rouge, audience, piano, Kigawa, into the state of pure music, which ended in the most wild cadenza, a tsunami of sounds.

The final seven-minute work was written by the young Italian composer Marco Stroppa. Unlike, say, Varèse and Nono, for whom electronics were experiments, Mr. Stroppa grew up with musical mathematics as commonplace as computers, and the electronic sounds heard against the piano, came not as novelties, but inevitabilities.

Somebody once said that opera arias should be written as if speech was no longer sufficient. In Mr. Stroppa’s work, a piece of unending energy played solo by Mr. Kigawa, became transmogrified into computer sounds because that was inevitable. The same notes, but now twisted entangled, the energy of the piano a montage of sounds which the piano could never imitate, yet came from the piano itself.

Always, though, we heard an energy–even though energy itself cannot be seen, heard, felt, touched. Where Debussy’s music eschewed the outer world for the inner mind, where Murail transcended piano music into “remembrances of tones past”, Mr. Stroppa took us to a realm which never exists except that we need a word (“energy”) for an imprecise definition.

If synchronicity exists, I had experienced an introduction to Mr. Kigawa’s program three hours before, a mere three blocks away from Le Poisson Rouge at Film Forum Theater. Three films by the American-born British-residing Quay brothers, replicated that same sense of the abstract, the cloudy, the tale which isn’t quite a tale, were shown here. One, with music by Karlheinz Stockhausen (his “Two Partners”) made the composer cry when he saw it. But that was less important than a visual experience which turned ocular experience into an original simulacrum into our own minds.

That was the effect of the Poisson Rouge recital. At the end of this concert. Mr Kigawa made his perfunctory bows, but they were secondary to the language he had spoken. The words were alien, the translations non-existent, but the artist made us (as E.E. Cummings directed), “Listen”. Explaining, then, “There’s a helluva good universe next door. Let’s go!”