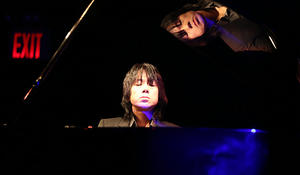 Summer school has been in session in New York piano recitals. Recently, at the Kaplan Penthouse at Lincoln Center, Pierre-Laurent Aimard gave a lesson in canons and fugues, a prelude to his performance of George Benjamin’s combination of those two forms in “Shadowlines.” And on Aug. 24 at another intimate space, Le Poisson Rouge, Taka Kigawa held a class on reverberation and resonance.

The works on Mr. Kigawa’s syllabus — the two books of Debussy’s “Images,” Tristan Murail’s “Territoires de l’Oubli” and Marco Stroppa’s “Traiettoria ... Deviata”— were far more similar than they were different. In Mr. Kigawa’s hands, they were investigations of the lives and deaths of sounds. As he moved through the program, you became increasingly sensitive to just how much of what you hear from a piano is a mysterious interplay of tones, sometimes long after the keys have been struck.

So toward the end of “Territoires de l’Oubli” (1977), in which the sustaining pedal is held down throughout the piece’s nearly 30-minute duration, even the starkest, iciest notes have resonance, like the vapor rising from drops of liquid nitrogen. “Traiettoria ... Deviata” (1982) sometimes adds to, and sometimes supplants, natural reverberations with echoing, otherworldly electronic sounds.

Debussy is a much earlier source for similar experiments in “Images” (1905-7). At the end of “Reflets Dans l’Eau,” the notes get further and further apart, but the effect is to make the reverberations that surround them seem ever more saturating. In “Hommage à Rameau,” the Baroque period is brought into the world of late Romanticism through the introduction of echo and resonance.

Mr. Kigawa’s effort in the churning yet feather-light “Mouvement” was audible: This was not the most limpid Debussy. Yet it served this thoughtful pianist’s purpose — presenting studies of echoes — with washes of overlapping sounds, also a feature of the strummed chords of “Cloches à Travers les Feuilles,” in the second book of “Images”; the richly steeped “Et la Lune Descend sur le Temple Qui Fut”; and the slow expiration of the last note of “Poissons d’Or.”

Coming half an hour after an opening with a Debussyian watery flow, the slow fade of the final tone in “Territoires de l’Oubli” recalled that moment at the end of “Poissons d’Or.” Mr. Murail’s tones, some of them uncannily gonglike, cast off trails, whether in the form of natural resonance or written out as somber scales. Violent quivering, even pounding, on extremes of the piano yields peaceful decline in its aftermath.

Mr. Kigawa plays with a fundamental gentleness, even in intense passages, but he brings a precision to the relentless pricks and bristling repetitions in these pieces that’s especially effective when contrasted with the amorphous soundscape of “Traiettoria ... Deviata.” That work’s concept — an interaction of acoustic and electronic — can seem pat in 2015, but the relationship between the two worlds is vivid enough to still persuade.